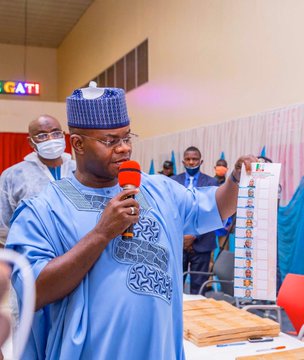 The election was contested by 21 other political parties according to SIEC  as voters turned out to vote for their respective candidates.

Apparently, there was voters apathy in virtually all the local government areas ,  but the elections  was generally  peaceful through out the state.

He also stressed that APC equally won all the councillorship  seats in all the 239 wards in the state, noting that  the local government councils polls was free, fair and credible.

Meanwhile , the People’s Democratic Party (PDP), Kogi state chapter has faulted the council polls across the 21 Local Government Election of the State describing it as a big mockery to the nations nascent democracy.

The State Publicity Secretary of the Party, Mr Bode Ogunmola in a statement on Saturday, described the entire process as a scam.

Ogunmola  noted that  the State Government should have opened up to the entire people of the state  that they were  not ready to conduct any council election rather than wasting the precious time of electorates who are willing to express their anger through the ballot on the maladministration of the present All Progressive Congress, (APC), in the last five years.

The Party spokesperson alleged that some thugs loyal to the ruling party, invaded the headquarter of the Kogi State Independent Electoral Commission, (KOSIEC), on Friday night, to snatch ballot boxes into an unknown destination.

He said the ruling party would have tasted a sweeping defeat, if they where willing to conduct a credible, free and fair election, as their five years in power has been greeted with poverty, unemployment, hunger and shrinking economy.

‘There is no election any where in Kogi State. I am at 002 Open space voting unit in Ogori, This is 9.30am and there is no sign of any voting any where. Reports reaching me from across the state is the same. This is a big disgrace to our state again under the APC led government”.

Also in his comment ,  the state chairman of Social Democratic Party (SDP) Alhaji Muktar Atimah  condemned the outcome of the election.

Speaking with newsmen on Sunday, he pointed out that having received assurances from the SIEC chairman of conducting a credible polls, he lamented that the council election lacked the minimum standard, describing the election as an aberation to known democracy.

He  called on the President to ensure that a holistic reforms on the conduct of election is carried out before he lives Office, else it would be safe to say democracy in the country has been murdered.

The State SDP Chairman called on the members of the party to observe a month of mourning as a way of registering there displeasure to the conduct of the concluded Kogi State Council election.

The elected chairmen are expected to be swear in on Monday at government house Lokoja.