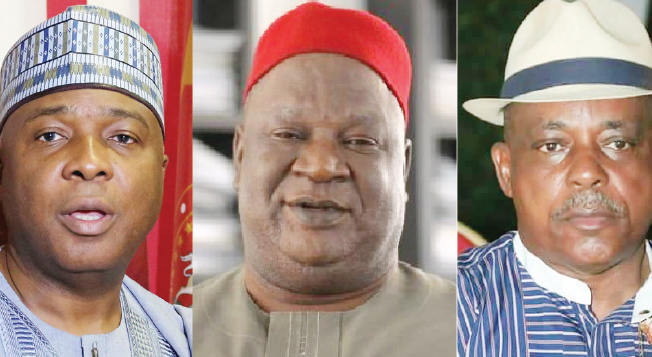 About two weeks ago, the Peoples Democratic Party set up the Senator Bukola Saraki-led   National Reconciliation and Strategic Committee.

As the name of the committee suggests, its mandate includes reconciling aggrieved party members and helping the party to reposition itself and strategise for the task of returning to power in 2023.

While inaugurating the committee, the PDP National Chairman, Uche Secondus, made no pretences about the challenges which the party was seeking the Saraki-led committee’s help to deal with.

The party chairman said, “We have carefully chosen men of integrity and those with the best skills in the country to solve the problem of our party.

“We have absolute confidence in them to carry out this assignment. We also believe that reconciliation is a major assignment in our party. And as you are aware, the country is falling apart; Nigeria requires the leadership qualities domiciled in our party to show the pathway for the next general elections in 2023. It is so important at this time that they come on board to serve not only the party, but also to serve the entire country.

“The country is in dire need of men of high integrity who will prepare our party and our people for the 2023 general elections.”

Saraki, who is the chairman of the committee, in his remarks acknowledged the enormity of the task. He likened the party to the larger Nigerian society which is currently bedevilled with a lot of challenges traceable to a lack of unity.

According to him, the greatest challenge facing Nigeria today is that of disunity, lack of unity of purpose and inability to focus on common national goals.

He said, “This disunity manifests in our politics, social relations, interactions between the various demographic groups, and between the people of various religion and ethnic groups.

“Since political parties are vehicles for mobilising the citizenry around national goals, objectives and ideas, it is important for the passengers in the vehicle to be in harmony, stay together in peace and be focused on their destination and the best possible route to get there.

“This initiative by our great party to embark on genuine reconciliation, strengthening of our structures, addressing the grievances of our members, re-inventing the all-inclusive, broad-based foundation of our party which has been the goal of our founding fathers is, to quote Victor Hugo, ‘an idea whose time has come.’”

While promising to reach out to party members who had one grievance or the other, in a bid to reconcile them, Saraki promised, on behalf of the committee, to leave no stone unturned to help put the PDP house in order.

The PDP had spent 16 unbroken years as the ruling party before its fall in 2015.

Before his return to the PDP fold, Saraki had joined five serving state governors to dump the party in 2015 over certain disagreements with the then President, Goodluck Jonathan, and the party leadership.

His unpleasant experience with the All Progressives Congress where he took refuge prompted him to return to the PDP, shortly before the 2019 general elections.

Political pundits as well as members of the party have unarguably built a consensus around the fact that most, if not all, of the PDP’s challenges, are self-inflicted.

A former Deputy National Publicity Secretary of the PDP, now an APC chieftain in Gombe State, Abdullahi Jalo, while commenting on the issue, said, “The PDP started losing it when the leaders stopped listening to the people they were leading and internal democracy disappeared from the decision-making process. Party leaders became overlords and anyone who disagreed with them was treated as an enemy.”

He further explained that all these came to a head when the then President and a few of his handlers jettisoned the party’s zoning arrangement which angered several critical stakeholders.

Saraki and his team are coming on board at a time the party is being dealt a big blow by a gale of defections.

The Governor of Ebonyi State, David Umahi; former Speaker of the House of Representatives, Yakubu Dogara; former Senator Hamman Misau; and Senator Elisha Abbo, all left the party to join the APC mostly as a result of disagreements with their respective state governors over party affairs and personal political ambitions.

These are just a few of the disputes the Saraki-led panel will have to settle, according to Ibrahim Usman, a member of the Kwankwasiyya political group, of the Kano State chapter of the PDP.

“the problem Saraki and the reconciliation committee must solve before the party could return to power in 2023 is this issue of governors controlling everything.

“There are founding party leaders who are leaders in their own right but are soon relegated to the background when somebody joins the party within three months and becomes governor.

“The new entrant automatically becomes party leader in the state and is allowed to take over the entire party structure to the exclusion of those who have always been on the ground. There should be a way where the interest of the party can bring everybody together.”

A former Senate President, Ken Nnamani, spoke recently about issues of disputes in the party in the South-East.

While addressing a crowd of the APC supporters during Umahi’s defection from the PDP, Nnamani said, “We in the South-East simply don’t have the capacity or resources to play opposition politics. We have to be in the mainstream.”

The struggle to control the party structure ahead of the 2023 elections is another sore point among contending power blocs at all levels.

From the North to the South, party leaders are competing to control the party structure to advance their political causes.

This struggle has led to a series of litigations in some state chapters. Where such litigations fail to yield the desired results, aggrieved party members either leave on their own accord, or are forced out, or remain to undermine the party from within.

According to a lecturer in the Department of Political Science, University of Jos, Joseph Anuga, political ambitions are at the heart of most struggles for the control of party structures.

He said, “More often than not, politicians join political parties to pursue political goals either for themselves or for a cause they believe in. In any of these scenarios, they would want to be in a position where they can ensure that the outcome of contestations will turn out in their favour. It is the nature of politics.”

In recognition of this fact, Saraki had said, “While it is legitimate for politicians to have ambitions, this is the time for us to push our ambitions to the back. How can anybody realise his ambition when the political party on whose platform he wants to pursue his ambition is not fully united? That is why I believe our pre-occupation as members of the PDP now should be how to unite the party, strengthen it and put it in a position to beat all opposition in coming elections.”

While an uneasy calm pervades the national leadership of the party, the same cannot be said of a number of state chapters. From Ekiti to Plateau, Anambra to Adamawa, Lagos to Kano states, party leaders at several levels with ambitions for the 2023 general elections are at each other’s throats in the quest to control the party structure.

The task before Saraki and his team will, without a doubt, require an ability to harmonise personal ambitions with the party’s interest not only to survive but also thrive to become the party of choice before the 2023 general elections.

The Chairman of the PDP Board of Trustees, Senator Walid Jibrin, is optimistic about the success of the party’s effort to put itself in order and bounce back to reckoning before Nigerians return to the polls in about three years’ time.

Jibrin, who is also involved in seeking solutions for the seemingly intractable crisis within the Nasarawa State chapter of the party, said, “We are on track to resolving all the issues. The Governor of Benue State, Samuel Ortom, being the only PDP governor in the North-Central, has really done a very nice job reconciling our members in Nasarawa and Niger states.”

He expressed confidence that the Saraki committee would build on the successes recorded and forge ahead.

The National Publicity Secretary of the PDP, Kola Ologbodiyan, on his part, explained that most Nigerians had come to realise that they were deceived into abandoning the party in 2015, hence the renewed attention on the PDP.

He said, “The PDP brand is pan-Nigeria, it is the only party which you can find in every village of every ward across the length and breadth of Nigeria.

“We are putting our house in order and even the APC knows; that is why out of confusion they decided to dissolve their party structure from the wards to the national level.

“This is one of several panic measures they will be taking in the coming months because they see a rebranded PDP stepping up to take their place in 2023.”