Adijat who dragged her husband to court alleged that he drank alcohol and smoked Indian hemp. 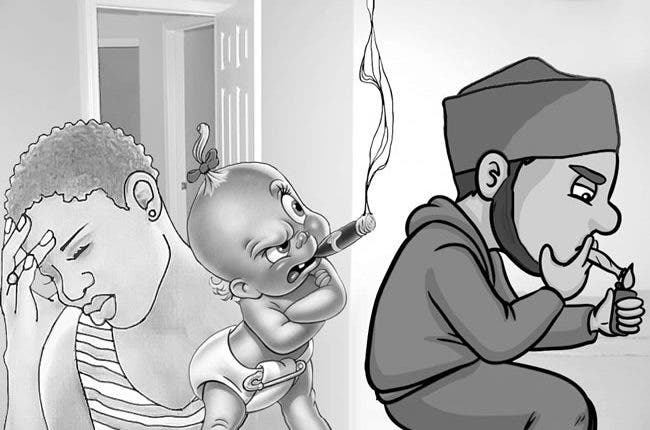 She stated that when Adebayo was high, he would beat her to a pulp, destroy her property especially her tools and threaten to disfigure her face.

The plaintiff told the court she was fed up with her husband’s maltreatment of her and thus entreated the court to dessolve the marriage.

Adijat further appealed to the court to grant her custody of the only child in their marriage.

According to her, their child who is a male and a little above one year had started imitating his father’s smoking habit.

She explained that it was necessary that she had their child in her custody in order to raise him as a   responsible human being.

The plaintiff said: “My lord, all that my husband knows to do is drink alcohol and smoke Indian hemp.

“Adebayo snuffs wraps of Indian hemp everyday and when he is high, he starts to misbehave. He will beat me to a pulp, tear my clothes and destroy my belongings.

“My husband has succeeded in ruining me. He has destroyed almost all the tools in my shop and this has automatically affected my vocation as a fashion designer.

“My parents spent through their nose training me as a fashion designer and bought me the necessary tools despite being already married to him. They also rented a shop for me. My husband didn’t contribute a dime towards these, but he derived pleasure in damaging my tools, “she stated.

“My lord, our first child who is a little above one year has started imitating Adebayo’s smoking habit.

“He would put a piece of paper in his mouth and pretend to be smoking. He would call me, then point to the paper and say ‘daddy’.

“The day I called my husband’s attention to this, he got angry and beat me blue black.

“I informed his family members of his reckless lifestyle but they took sides with him. He again beat me mercilessly for reporting him.

“Adebayo cared less about my welfare and that of our only child. He never knew how we survived each day. He would leave home without leaving a dime but would come home expecting to meet food on the table. We fought constantly over this.

“I moved out of his house when I realised he was not ready to change and that he might kill me as a result of his regular beatings.

“My lord, Adebayo would sometimes waylay me on my way to shop and beat me.

“There were times he came to my shop to beat me and destroy my tools. Any time he beats me, he will tear my clothes in shreds.

“He is now threatening to disfigure my face so that I won’t look appealing to any other man.

“My lord, I plead that you end our marriage and restrain him from carrying out his threat.

“I also pray that the court award me the custody of our child so that I can bring him as a responsible citizen, “Adijat stated.

Adebayo refused to accede to divorce stating that his marriage to the plaintiff was carried out through the proper procedure and that he paid her dowry.

The defendant stated that his wife was engaged in extra marital affairs.

According to him, she was always conversing on phone in Hausa language with a particular man who is her lover  and who was fond of calling her late in the night.

“I don’t agree that Adijat and I go our different ways. I went through the normal procedure in carrying out our marital rites and also paid her dowry. I have spent much on her, she therefore can’t leave me now, “Adebayo said.

He added that, “Adijat lied that I smoke Indian hemp. I admit to drinking gin, but I have never smoked in my whole life.

“My lord, it is true that I beat her. I did because she was unfaithful to me.

“Adijat was involved in extra marital affair while still under my roof.

“She was always spending meaningful time talking to her lover who is a Hausa man on phone. She speaks Hausa language fluently and their conversation was always carried out in this language.

“My lord, Adijat once left the cooking after she received this man’s call and left home for hours. She didn’t return until it was dark.

“I sometimes came across a male’s clothes in her possession but she would lie that they belonged to her customers. She specializes in female clothes and not male.

“We once fought and her parents asked that I write an undertaking never to beat her again and I did, but she never stopped misbehaving.

“My lord, Adijat is dirty. She was in the habit of leaving our apartment unattended to. She neither swept nor cleaned the place thus leaving it looking untidy always.

“The day she moved out of my house, she fought and cursed me and also tore my clothes.

“My lord, any time I go to Adijat’s shop to check on our child and give her money for his feeding, she will fight me.

“She lied that I destroyed her tools. I never did, “he concluded.

Giving his judgment, the court president, Chief Ademola Odunade observed that their relationship had gone sour.

Ruling, he dissolved their union and handed over their child to the plaintiff.

The defendant was to pay N5, 000 every month for their child’s feeding.

He was likewise ordered to be in charge of his education.

Odunade again, demanded that he should make himself available any time the child was in need of health service.

Both were asked to maintain peace.