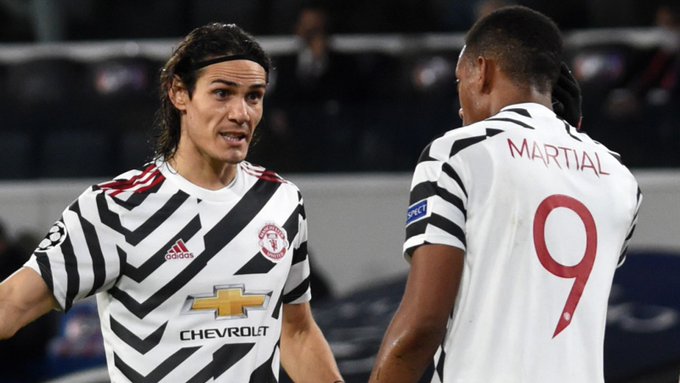 Cavani and Martial missed Tuesday’s Champions League defeat to RB Leipzig, which saw United finish third in their group and drop into the Europa League knockouts.

Despite that disappointment, United have won their last four Premier League games – a run which helped Bruno Fernandes pick up the November Player of the Month award – and Solskjaer believes the City match at Old Trafford presents his side with the perfect opportunity to bounce back from the defeat in Europe.

“It’s probably the best game you can ask for after such a disappointment because it does stick in the system.”

On Martial and Cavani, he added, “Anthony will definitely be involved, Edinson has been on the grass but I’ll make a decision later on.”

Meanwhile, Solskjaer said he has spoken to Paul Pogba after the player’s agent Mino Raiola said his client’s time at United is “over”.

“I speak to my players on a daily basis, Paul is no different to anyone else,” Solskjaer added. “For me, what was disappointing this week was us going out in the Champions League. Players want to go through in that. Whatever anyone’s representatives say can’t really affect me. I’ve said what I want to say about that.”

Solskjaer also backed David de Gea after his costly error against Leipzig, which came before the Spaniard was one of 10 goalkeepers named on the FIFPro World XI shortlist.

“I think David is a top goalkeeper, of course I do. Rightly so. He’s on lists for being on the best goalkeeper in Europe. He’s handled criticism before, he’s handled setbacks before, he’s a man we really rely on, and hopefully he’s not affected by criticism, and I don’t think he will be because every goal a goalkeeper concedes you’d be disappointed with.”