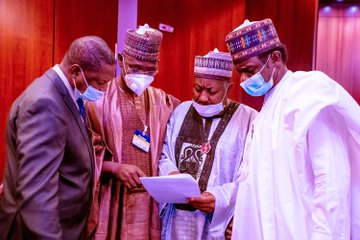 Addressing State House correspondents at the end of the APC NEC meeting held at the Presidential Villa in Abuja presided over President Muhammadu Buhari, Governor Nasir Ahmed El-Rufai of Kaduna state said NEC also approved the dissolution of ward, local government, state, zonal and national structures of the party nationwide.
The governor, who briefed alongside his Imo and Ondo states counterparts Mr Hope Uzodinma and Rotimi Akeredolu, respectively, said NEC also approved the expulsion of former National Vice Chairman of the party in the South-south, Mr Ntufam Hilliard Eta, for refusing to withdraw the suit he filled against the caretaker committee.
“We have been mandated by the National Executive Committee of our party to brief you on the outcome of our meeting which just ended. The meeting is a mix of physical and virtual meeting with all the governors, members of the National Assembly in the NEC, Mr. President meeting physically in the council Chambers while other members of the national executive committee joined us virtually.
“The NEC resolved as follows: National Executive Committee of the party approves the extension of the tenure of Caretaker/Extraordinary National Convention Planning Committee led by Mai Mala Buni, which  expires in December 25, 2020 for another six months period, to terminate on June, 30, 2021. This is to enable the Caretaker and Convention Planning Committee to conclude its assignment as laid before NEC.
“NEC has also donated its powers as enshrined in Articles 13.3 Subsection 5 and 13.3 Subsection 6 of  the APC Constitution to the Caretaker and Convention Planning Committee.
“The second resolution is that NEC has approved the granting of wavers to persons who have recently joined the party members and those desirous of joining the party in the nearest future. By this, such new members will enjoy all the benefits and privileges accruable by virtue of their membership of the party. So they will be able to contest for positions in the party, they will be able to contest elections without any requirement of being members for number of years or period of time.
“Third resolution, NEC approved the expulsion of Ntufam Hilliard Eta from the party for flaunting the directives of NEC to discontinue all litigation against the party and its members.
“The fourth resolution, NEC approved the immediate dissolution of the party organs at the polling units, wards, local government, states and zonal levels as well as the non National Working Committee component of the National Executive Committee as well as their immediate reconstitution and composition of the dissolved EXCOs to serve in their respective offices in a caretaker committee capacity but excluding the non-NWC members of NEC.
“Finally, the NEC condemns in very strong terms, the call by the PDP.leadership and some of their cheer leaders for the resignation of Mr. President. NEC observes that security challenges though regrettable can only be addressed when all interest, civil and military, governments and opposition, security forces and indeed all citizens collaborate irrespective of party affiliation. This is not the time to politicize security,” he said.

On the fact that decision to give waver for new entrants to contest elections was targeted at certain politicians, El-Rufai said, politicians by our vocation are trained to look for conspiracies in everything, for those of us that have the opportunity to run government, every policy decision you take has winners and losers, you can never please everybody.
But what the caretaker committee want to do? They want to do three or four things, revalidate voters register which has not been done since 2014. Many members have left the party, many new members have joined, Saraki was a member of our party and today he is not. We need to update our register, so tell me how updating register can edge out anyone? Secondly, we intend to have Congresses from polling unit, to ward, to local government, to state and then national convention. How will that edge out anyone? It’s a level playing field for everyone. But the problem with politicians particularly those with aspirations, they want whoever is there to be on their pockets, that is the only time they sleep. Once you have people that are independent and trying to push the interest of the part, people complain.  In what way is that going to affect the interest of any person who is democratic, who wants to have a level playing field to contest election or realize his ambition? I don’t see how?”

Also speaking, Governor Rotimi Akeredolu of Ondo state said: “The NEC at its meeting approved the dissolution of party organs at the polling units, wards, local government, states and zonal levels as well as the non-NWC members. As clearly stated, also the composition of the dissolved EXCOs to serve in their respective offices in a caretaker committee capacity until we complete party registration and conduct congresses.”
“Which is why the Caretaker/Extraordinary National Convention Planning Committee needs more time to organise this, which is expected that before the end of the expiration of the life of the extension, they would have conducted the national convention, so that we have leadership from the top down. This is in compliance with the states wish of Mr. President that we should rebuild the party from the bottom up. So, this is the process.

“Registration is going to start very soon and revalidation of registration and membership. Since we undertook our last membership registration in 2015, about 25 million have reached the age of 18 and may want to join the party. So we want to capture those and then after we complete the registration then we will have Congresses at these various levels, leading up to the national convention before the 30th of June 2021 by the grace of God.”
On if there is provision for another extension should the caretaker committee not complete its assignment in six months, the governor said: “We have good reasons to extend the live of the caretaker committee. As you are aware, we had put in place caretaker committee and within those six months, we have had serious engagements, the elections in Edo and Ondo states. We were looking forward to the work being completed in six months but with the all that intervened and what they had to cope with, it became clear and that is why we have come now…this mandate, I can assure you they will complete this mandate within this period. Again, we don’t have so many things that will intervened like COVID, ENDSARS and do, barring all these we are sure they will complete their task in six months.”

Speaking on the waver, Governor Hope Uzodinma said: “The Constitution allows you certain privileges including the opportunity to contest elections, being sponsored by the party you must be a member of the party up to the minimum period of two years. You will agree with me that APC is growing both in population and popularity and the excitement out there for people to join the party, particularly for politicians who want to run for one office or the other. Of course, that clause is what is being cited by the decision of today, that if you join APC whether you are a member for up to two years or not, you will still have the right to participate and contest election being sponsored by the party. It is an incentive which will allow new members and all, intending members who will now want to run for elections to join the APC.”
On Imo north bye-election, the governor said: “Of course APC won. You will agree with me that we had a very transparent election and a winner emerged, Frank Ibezim and he was nominated and sponsored by the party and his name forwarded to INEC and then comes this litigation by a member of the party. And within that short period, there was an interim court order which has since been vacated by the Appeal Court. I think INEC is doing their internal workings now and they are going to issue him with a certificate or return. There is no ambiguity as to who is the senator-elect, the party has the right to sponsor whoever it chooses to sponsor.”