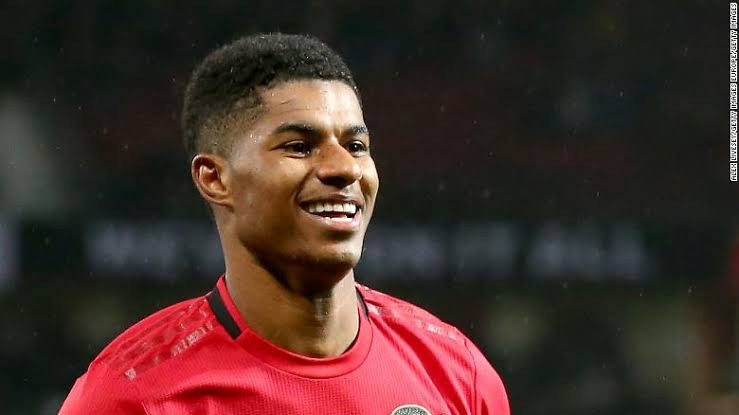 England international and Manchester united striker, Marcus Rashford has revealed his deep bond with his boyhood club, hinting that he wants to stay at Manchester United for the rest of his career.

The 23-year-old joined United at the age of seven and progressed through the club’s youth ranks before making his senior debut at the age of 18 in Europa League tie against FC Midtjylland in 2016.

By the end of the 2016 campaign Rashford had scored eight goals in 18 appearances for the Red Devils, as well as earning a place in the England squad for that summer’s European Championship in France.

He has remained a key player for both club and country since, scoring 77 goals in 232 appearances for United as well as 11 goals in 40 games for the Three Lions of England

Speaking at the British Sports Awards on Thursday night, December 10, where he finished runner-up to Formula 1 world champion Lewis Hamilton in the Sportsman of the Year category, Rashford said he is hopeful of remaining a Manchester United player until he retires.

“For me, I never look beyond Manchester United,” he said.

“As a kid I never looked beyond Manchester United. In my mind it wouldn’t sit right for me to be pulling on another shirt. I just want to do my best for the club while I’m here. Long term hopefully.”

As well as his achievements on the pitch, Rashford has earned praise for his campaign to try and end child food poverty in the UK after he successfully made the government extend its policy of providing free school meals for underprivileged children outside term time in June 2020.

He didn’t just stop there as he also helped set up the Child Food Poverty Task Force to try and help those in need.

He was appointed Member of the Order of the British Empire (MBE) in October by Her Majesty Queen Elizabeth in recognition of his efforts.

Rashford has revealed this off field campaigning is inspired from his own experiences as a child, while the support Manchester United gave him during that time has created a lifelong bond that stretches beyond football.

“All the good things that have happened this year have come from Manchester United giving me an opportunity as a kid. I don’t just remember the last year or the last five years,” he added.

“I’m talking about when nobody in my family drove and I had to get to training and United had people to come and take me to the training ground and take me back home when I was six, seven, eight, nine.

“The times they put me into accommodation when my mum was struggling at home, when I was 11 and I was there up until 16/17.

“It is a lot deeper than what people see sometimes. I think people see some of the stuff that has been happening since I’ve been in the first team but the bond that I have with United is much greater than these last five years and it will forever be greater than probably my actual career because they are the reason I have become a footballer, they have given me the opportunity to express myself and to find out I had talent in football.”