Home NEWS Trump calls on Supreme Court to ‘have the courage’ to overturn Biden’s... 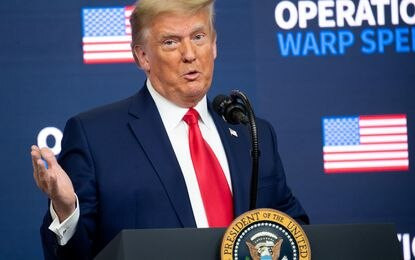 US President, Donald Trump has called on the U.S. Supreme Court and legislatures in some battleground states to “have the courage” to overturn President-elect Joe Biden’s November 3 electoral victory.

Speaking at a White House event on Tuesday night, December 8, Trump insisted he won the election and claimed Biden was only crowned the victor because of “terrible” voter fraud.

“If somebody has the courage, I know who the next administration will be.”

His campaign also wants to take the electoral challenge before the U.S. Supreme Court, but these new remarks represent his most direct public calls for electoral intervention.

Despite Trump’s repeated claims of fraud, no evidence has emerged to suggest Biden’s election victory was fraudulent as most states, including the six battlegrounds where Trump is trying to flip Biden’s victories, have certified their results while courts have also dismissed lawsuits from Trump’s campaign.

In a relevant rebuke, U.S. Supreme Court Justice Samuel Alito, one of the conservatives in the court, rejected a request from Trump-loyal Pennsylvania Republicans late Tuesday to decertify Biden’s victory in the state.

Trump also sought to claim credit for the COVID-19 vaccine distribution that will take place under Biden’s imminent presidency.

“Whichever the next administration is will benefit from this,” he said.

Tuesday was the deadline to wrap up all state-level election challenges, including recounts, audits and lawsuits, reducing Trump’s chances of staying in the White House.

Trump is hoping that the Supreme Court’s new 6-3 conservative majority will have his support when his legal challenges reach the court.