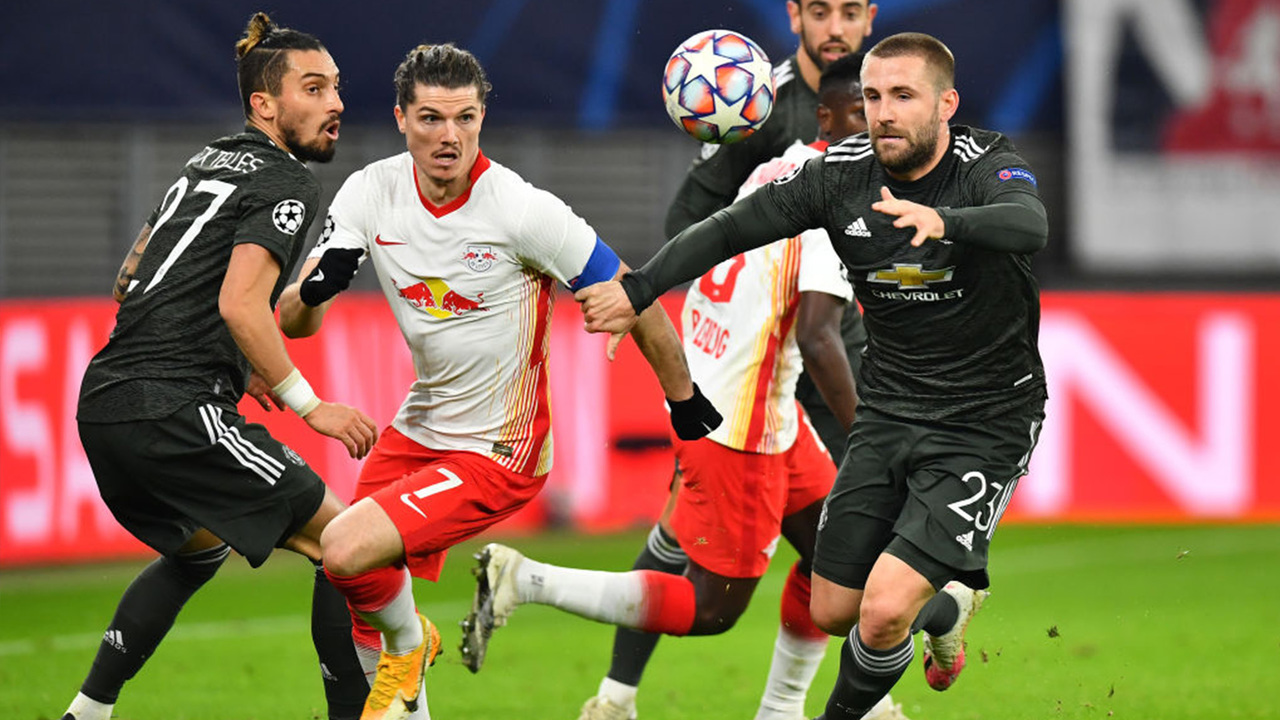 Manchester United’s Champions League flame was put out by RB Leipzig who saw off the Premier League side in Germany.

The Red Devils only needed to avoid defeat at the Red Bull Arena and set up accordingly with a back five.

But they were behind in two minutes as on loan Manchester City man Angelino struck a sweet shot into the corner to take advantage of some slack defending.

Amadou Haidara then doubled their lead 10 minutes later when he slotted home unchallenged at the back post.

Ole Gunnar Solskjaer was unable to inspire another Houdini act at half-time despite the inevitable improvements.

He made the decision to call on Paul Pogba with half an hour but it was Leipzig who struck for a third time when Justin Kluivert pounced on David de Gea’s indecision.

Bruno Fernandes scored from the penalty spot with ten minutes remaining and Pogba headed home to give genuine hope that the visitors could again come back.

Results cover up a lot of cracks, but they can’t do so forever.

United’s habit of falling behind on the road has almost become part of the theatre as they continued to comeback and pick up wins.

But it was clearly something that needed to be address, yet on the evidence of the first 20 minutes in Germany it was again neglected.

Even after their win at West Ham on Saturday Marcus Rashford urged his side to stop making life hard for themselves.

You wonder then what he would’ve thought as he stood in attack as Leipzig scored twice in the first 12 minutes.

United had been playing a dangerous game for too long and it eventually caught up with them on a night where defeat was decisive.

You wonder, given the benefit of hindsight, whether Solskjaer would rethink his United line-up in Germany.

Yes the English side only needed a draw to progress, but they turned up looking for exactly that.

It is always a risky game to aim for the bare minimum, especially when clean sheets aren’t a regularity.

Paul Scholes expressed concerns before the match as he doubted his former side’s ability to sit in and get the draw they needed.

The back five with Luke Shaw operating as a centre-half did, at times, reap rewards last season and was again successful at PSG.

But United haven’t used the system since that win on October 20, yet they turned to it for perhaps their biggest game of the season.

All of Solskjaer’s most impressive performances have come when playing three in attack.

Surprising then that the Norwegian opted against those tactics, especially as he so lauds the club’s traditions.

From the minute Mino Raiola came out and did his thing this was always going to be a topic of debate after the contest.

You can’t imagine a worse preparation for a crunch European clash – and United still have to pick themselves up for the Manchester derby on Saturday.

Unsurprisingly he was left on the bench before being introduced on the hour.

His goal capped an impressive cameo, but Pogba has long been an unsettling influence in Manchester.

This week though he and his agent have perhaps come up with their crowning moment if he is to secure a January exit.

It’s a pretty damning legacy when you realise Pogba will be more remembered for everything he, and his agent, contributed off the pitch rather than on it.

It is the fixture congestion no one wants.

The disappointment of their Champions League exit will be followed by preparation for the Europa League.

United made it to the last four of Europe’s secondary competition last term before being beaten by Sevilla.

But as Solskjaer eyes the top four, a race that this season looks fiercely competitive given the form of their rivals, he won’t be looking forward to games on a Thursday night.

The Norwegian was one of the first to really bemoan the fixture schedule this term.

So you wonder how he’ll feel about it when he’s having to factor in two games in the space of three days with a continental travel in between.

Sir Alex Ferguson famously bemoaned his team’s Champions League exit in 2012 as they dropped into the Europa League.

“It is a competition I’ve never been in with United. It does mean Sunday right through to Thursday so that has got to be dealt with. Its not the best.

“But that’s our penalty for not qualifying tonight.”

Solskjaer will now have to deal with the same penalty.

Julian Nagelsmann was well known by European football’s aristocracy before he signed with Leipzig.

His exploits at Hoffenheim had put him firmly in the shop window, but no one was willing to take a gamble on him.

Instead a side in Leipzig, one who aims to be a regular at the top table, were prepared to take the plunge and are reaping the rewards.

They appointed him in 2018 ready for him to take over 12 months later.

At that point the wheels were about to fall off at Old Trafford and Jose Mourinho would leave a few months later. Solskjaer has since been given the reins.

Nagelsmann is tipped for big things, while Solskjaer perhaps isn’t.

The 33-year-old coach has again taken a team a little over a decade old, who have only made one £20m plus signing in their history, to the knockout stages.

United meanwhile are heading for the Europa League once again. Food for thought.