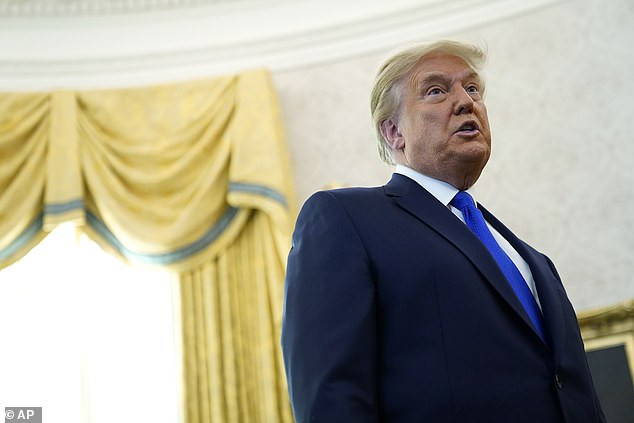 A White House official has revealed that President Donald Trump is willing to take the COVID-19 vaccine on TV, despite reports that he might not need it after recovering from Covid-19 back in October.

‘He’s expressed his willingness,’ an official told reporters during an on-background call.

‘I think there is an open question as to whether, ultimately, he will be one of the ones taking it on-air. And that’s simply a function of whether that would actually serve the desired purpose given the fact he’s a recovered patient.’

Recall Trump and first lady, Melania Trump tested positive for COVID-19 in early October and Trump was briefly hospitalized at Walter Reed, before returning to the White House after recovering.

Former presidents Barack Obama, George W Bush and Bill Clinton have said they will get vaccinated for coronavirus on TV to promote its safety.

The US Food and Drug Administration (FDA) plans to meet this week to discuss approval for the Pfizer/BioNTech vaccine which has been given greenlight by the UK.

The officials will also meet again on December 17 to discuss the request for authorization of the Moderna vaccine.

The US has the highest number of cases – 14.9 million infections – and deaths – 283,503 – from coronavirus worldwide, according to research by Johns Hopkins University.