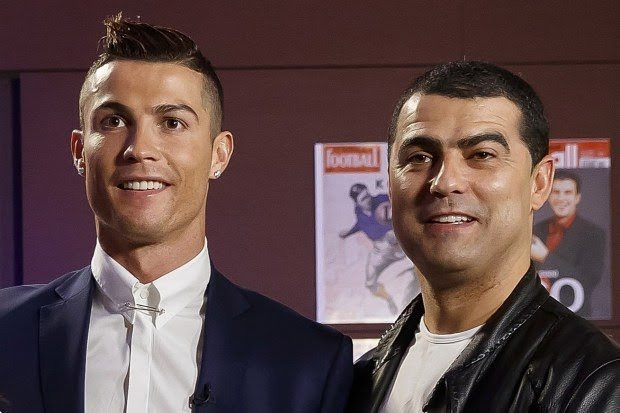 Cristiano Ronaldo’s brother, Hugo Aviero is currently being investigated for fraud after selling  shirts that were meant to be destroyed.

According to reports in Italy, Hugo Dinarte Aveiro is reportedly under investigation by an Italian prosecutor as he has been accused of selling some special shirts produced by a small Turin company called Pegaso that manufactures and distributes sports gadgets and clothing.

Football icon, Ronaldo owns a company Mussara, which is managed by his brother Hugo Aviero, and they ordered a number of shirts from Pegaso. According to reports, Pegaso were asked to produce the jerseys for Mussara, only for Mussara to pull the plug on manufacturing asking the company to send all already produced shirts so they could be disposed of.

Now Pegaso claim the shirts weren’t destroyed by Mussara, instead they were put on sale at the Cristiano Ronaldo Museum.

Hugo, who runs Mussara is now facing investigation as Pegaso have launched legal action against Mussara .

Its not the first time Ronaldo’sfamily has faced legal issues.
Ronaldo himself was handed a suspended jail sentence for tax fraud during his time at Real Madrid.

According to Spanish prosecution Ronaldo deprived the Spanish government out of 5,717,174 euros (£5.3 million) during a space of four years.

Ronaldo pled guilty and agreed a deal with the courts to avoid a longer trial and potentially a heftier punishment.

Ronaldo and his older brother have become incredibly close in recent years after the five-time Ballon d’Or winner paid for Hugo’s rehab as he suffered from substance abuse issues similar to what Ronaldo’s father Dinis suffered from before his death.

Dinis died in 2005 while Ronaldo was at Manchester United and at the time, Hugo played ‘street football’.