There was a low turnout of voters in eight of the 11 states where the Independent National Electoral Commission held bye-elections on Saturday.

States, where the low turnout of voters was witnessed, were Lagos, Imo, Katsina, Borno, Plateau, Bayelsa, Kogi, and Cross River. 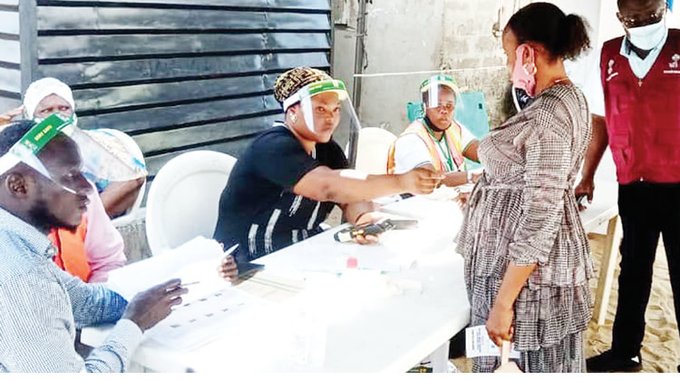 However, a significant number of voters exercised their civic duty in the states of Zamfara, Enugu, and Bauchi.

Findings by our correspondents indicated that voter apathy, card reader failure, and militarisation of polling units were parts of factors responsible for the poor turnout in the eight affected states.

On the other hand, investigations revealed that vote-buying, among other factors, was responsible for the high turnout of voters in the other three states.

INEC had earlier scheduled to hold bye-elections for some federal and state legislative houses in 11 states across 36 local government areas in October but postponed them due to #EndSARS protests which rocked the country.

Following the calm that ensued, the commission on Saturday held the bye-elections in which it deployed 36,223 staff members for the exercise.

INEC data showed that a total of 4,215,523 registered voters were eligible to participate in the bye-elections held in 36 local government areas, 413 registration areas, 7,702 polling units and 69,921 voting points.

However, there was a low voter turnout in Lagos, Imo, Katsina, Borno, Plateau, Bayelsa, Kogi, and Cross River due to voter apathy and militarisation of polling units.

For instance, Lagos East Senatorial District witnessed less than 10 per cent of the total number of voters accredited at the polling units.

During the monitoring of the exercise on Saturday, it was observed that at Polling Unit 007, Ward 5, situated on Ogunlana Street, Ketu Alapere, Kosofe Local Government Area, only 51 of 594 registered voters exercised their franchise.

In the House of Assembly bye-election in the unit, the All Progressives Congress got 43 votes while the Peoples Democratic Party had three. Four votes were void.

For the senatorial bye-election in the unit, APC polled 46 votes, PDP secured three, while two votes were void.

At polling unit 009 situated on Alhaji Adebayo Street in the same ward, only 40 of the 807 registered voters cast their votes.

In the senatorial bye-election in the unit, APC polled 27 votes, PDP got seven, while one vote was void.

At Polling Unit 001 in Ward 5 situated on Agboyi Ketu Road, Ketu Alapere, only 136 of 2,118 registered voters exercised their franchise.

The situation was the same in some polling units observed in Ikorodu, the hometown of the candidates of the PDP and the APC on Saturday.

One of our correspondents observed that there was no queue in most of the polling units.

Mr Ahmed Olalekan, a voter at PU007, Isele Ward 1, Ayangburen Isikalu Street Junction, decried the voter apathy, linking it to the security crisis in the country.

Also, an APC party agent at the same polling unit and ward, Mr Omoola Olawale, said, “People are not coming out, maybe because of the hardship in the land. Although some people came out, it was not encouraging.”

A PDP agent at the same polling unit, Mr Lawrence Akomu, said although the exercise was peaceful, the issue of voter apathy was glaring.

“The problem is voter apathy because people are no longer interested in this kind of exercise. Also, all along, those who got the mandate to represent the people didn’t meet expectations. Voters are dissuaded because of a lot of disappointments from politicians,” he said.

One of our correspondents who monitored the exercise witnessed that many people opened their businesses while the election was on at areas like Anara, Amaraku, Aba Branch, Malaysian market, Isinwaeke, and Orieagu.

An APC chieftain, Chikwem Onuoha, who spoke with journalists after casting his vote, said his party would coast to victory.

A PDP candidate, Emmanuel Okewulonu, who also spoke with journalists after casting his vote, said he would win if the integrity of the process was not undermined.

There was also a low voter turnout in many parts of Borno State where the exercise held, with many residents saying they were unaware of the exercise.

Speaking with journalists in Maiduguri, the INEC Public Information Officer in the state, Abba Liberty, said the election was peaceful, adding that result collation started as of 2.30pm.

In the Bakori Local Government Area of Katsina State, some voters said the heavy presence of security operatives scared them away from the polling units.

The bye-election was to fill the vacant seat of Bakori Constituency in the state House of Assembly whose former occupant, Abdurrazaq Tsiga, died in May after a protracted illness.

It was, however, observed that the majority of voters who turned up for the exercise were women in all the 11 wards that make up the local government area.

Counting of votes had already begun by press time while INEC sources disclosed that the final result for the election might not be announced until Sunday morning.

One of our correspondents also observed low voter turnout in the bye-election for Plateau South Senatorial District held across the six council areas that make up the zone.

Some of the headquarters of the local government areas visited were Mikang, Langtang North, and Shendam. Some areas in the Mikang Local Government Area like Tunkus, Mdega’am, Piapung, Konggung, Muanpus and Lakai, however, saw a large voter turnout.

Governor Simon Lalong, who voted at his Ajimakai polling unit around 11.41am, expressed satisfaction with the security during the election.

As of the time of filing this report, voting had been concluded and vote counting had commenced.

Meanwhile, the heavy presence of armed security men allegedly caused low turnout of voters for the bye-election at Ibaji Constituency in Kogi State.

He also described the exercise as a sham due to what he said was poor organisation by INEC.

Atimah, in an interview with journalists after monitoring the exercise at Ibaji, claimed that the process was infiltrated by fake security personnel, thus preventing many voters from coming out to exercise their franchise for fear of being attacked.

However, the state INEC Head of Department, Voter Education and Enlightenment, Bagudu Biambo, debunked the allegation.

He said election materials arrived at polling units as early as 8am with accreditation and voting taking place simultaneously.

But, the African Democratic Party candidate, Arome Omonu, disagreed with the commission, saying as of 11am at his polling unit and many others across all the wards, materials had not arrived.

Meanwhile, low voter turnout was also reported by our correspondents in Bayelsa and Cross River states.

During the Cross River North Senatorial District bye-election, an INEC National Commissioner, Festus Okoye, called for security reinforcement due to unruly behaviour by some voters at a Registration Area Centre at Ward 1, Ogoja Urban located in St Ben’s Primary School.

Okoye warned that the exercise would be cancelled anywhere there was disruption.

This is as there were allegations of ballot box snatching at Mbube in the Ogoja Local Government Area.

At the time of this report, a few results had been announced.