A soldier was filmed beating and stripping a woman naked because he considered what she was wearing to be indecent. 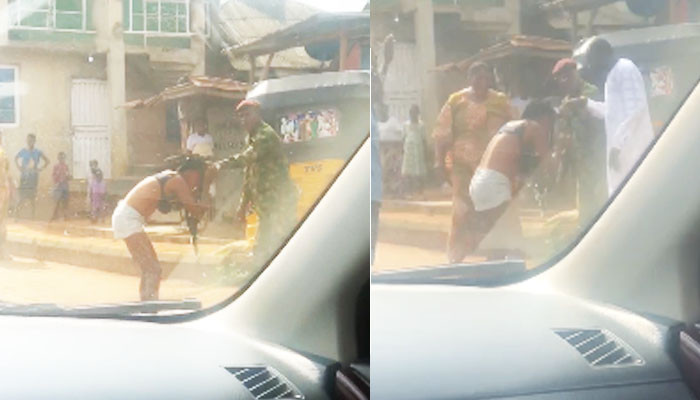 The incident occurred at about 9:46am today, December 5, at Oju-Ore, Sango Ota, Ogun State.

The woman was trekking, wearing a pair of shorts and white knitted coverup when a soldier inside a commercial bus saw her, alighted, and attacked her for how she was dressed.

In a video shared online, the woman is seen bending at the knee, seemingly pleading with him as he drags her cover-up off her body.

He also slapped her and pulled her by her braids, according to eyewitness reports.

Passersby intervened when he attempted to remove the woman’s bra and he only freed her after pleas from multiple people.

This comes one month after a soldier was filmed flogging a woman for dressing “indecently” in Beere, Ibadan

Below is a video of the assault.