A video of a white man marrying his baby doll of whom they have been dating for some time now has caused stirs online. 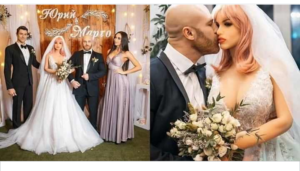 The marriage was between Mr. Hopun and the baby doll Mapro and was officiated by a female who is not married

.Social media users have reacted to the bizarre union between Mr. Hopun and his plastic bride.

Meanwhile, Popular Nigerian actress, Etinosa Idemudia has weighed in on Burna Boy’s cheating scandal raised by one Sierra Leonean fashion model, Jopearl. Reacting to this highly controversial matter, Etinosa opined that the lady did not speak like a side chick but like a wife who can’t be presented to the public because of how society perceives how a wife should be.