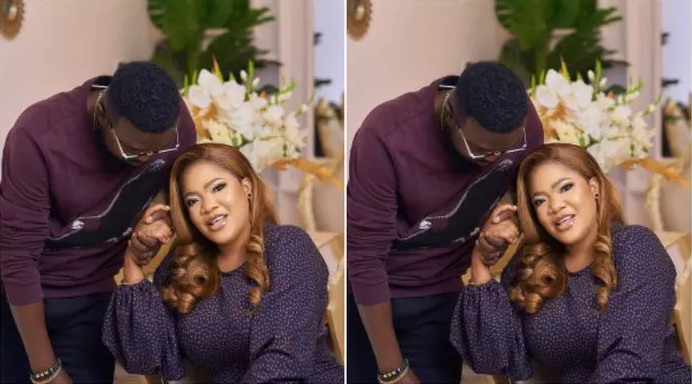 Toyin Abraham and husband, Kolawole Ajeyemi were on a date night yesterday.

The happily married celebrity couple stepped out in style for the ‘Kambili’ movie premiere in Victoria Island, Lagos.

Check out this beautiful moment of them below:

Actress Toyin Abraham in a vlog revealed how she found out she was pregnant of her son, Ire and the role her husband, Kolawole Ajeyemi played in all of it.

In her narration, Toyin Abraham who was previously in a failed marriage to actor Adeniyi Johnson, and also engaged to certain Lawyer, disclosed she was just good friends with Kolawole Ajeyemi and didn’t take him serious at first.

“When he told me he wanted to meet my parents, i was worried because i didn’t how to explain to them that i’m in relationship with an actor…..i told him I wasn’t ready” but as fate would have it, she fell pregnant at almost 40.

“You know how i have been wanting to get pregnant, I have prayed, taken Agbo and done everything and…….we were in Abuja for a conference with the first lady and while a speech was going on, I remembered that i hadn’t seen my period for the month…..after the whole event, i got a test kit, went to my hotel room and boom, i screamed when it came out positive…”

Further gushing of how God saw her through the 9months course, Toyin Abraham said “My food cravings was on another level, infact if we are to measure how much i ate while being pregnant, I shouldn’t be allowed to eat again till year 2029….i ate so bad that if i see a person with ketchup on his face, i can finish him or her”