Halima Abubakar is a popular Nigerian actress who was born in Kano, but a descent of Kogi state.

Halima Abubakar began acting in 2001 when she played a minor role in Rejected. Her first lead role was in Gangster Paradise. She is also the CEO of a Modehouse Entertainment, a music label and entertainment management company. 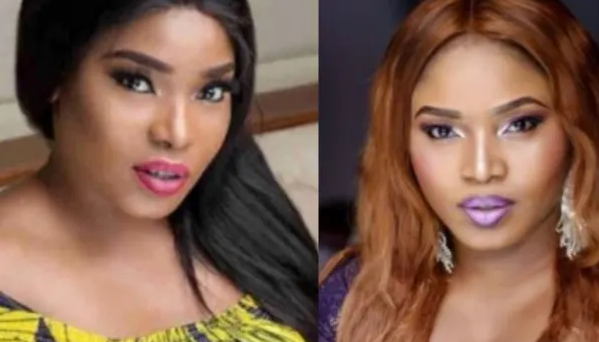 Although famous and love by many, Halima Abubakar has been hit by scandals ranging from her baby’s paternity to stealing a baby photo and down to using Juju (Voodoo).

Kemi Filani News brings to you, the many scandals that rocked actress, Halima Abubakar.

Few hours after Halima Abubakar announced that she’s a mother in April, an American mother called her out for stealing her baby photo.

The aggrieved mom identified as @the_arielb on Instagram wrote:

“I guess we are now famous in another coutnry.”

She then went on to write:

“I will not edit, delete, or censor my page because of the simple mindedness of others.”

Explaining that she posts her kids and life because she loves it and is proud of who they are, Ariel says having a baby is a private moment she decided to share. She opines that 2020 makes it look like having a baby is not personal but a screenshot crop and repost kind of comment.

A check on Instagram shows that Ariel posted her photo on March 13 while Halima posted the same photo this April (two days back as at the time of reporting).

Obtained screenshots of direct messages conversation between Ariel and Halima also have the actress admitting that she only posted the photo to announce her child’s birth.

As at the time of writing this report, the paternity of Halima Abubakar’s baby is still unknown.

While others claim she had the baby for a married colleague, others say a rich Abuja based man is responsible.

WHEN SHE ”EXPOSED” NIGERIAN MEN OF BEING BISEXUAL

Sometime in August, Halima Abubakar took to her social media account to send a cryptic message which set the platform agog as many of her friends and followers read meanings to the message.

The actress simply posted, “Don’t blame people who jump from one girl to another. Some times what they really want is another man. Don’t hurt yourself. Dust yourself and move on.”

In an exclusive chat with Punch, the Kogi state born actress shared her reason for the cryptic message. She revealed that about 40 per cent of married Nigerian men are on the “Down-low” (bi-sexual).

She said, “We have over 40 per cent of down-low (bi-sexual married men) in Nigeria, whether you want to believe it or not. Sadly, their families don’t even know. Instead of them putting their families through hurt, infect them with various diseases and end up killing their wives or themselves because they are scared to open up, I feel they should be truthful and realistic about their needs and put it first before anything.

HER ALLEGED USE OF JUJU

Former artist, Etcetera once claimed that Halima Abubakar and Tonto Dikeh who used to be best of friends ended their friendship because of a juju priest.

“Our nollywood sources tell us, that Halimah Abubakar and Tonto Dikeh who used to be good friends, fell out because of a juju priest — It is said that Halimah, took Tonto to sample the powers of her juju priest who got encharmed by her looks and preferred working for her instead of his usual customer, Halimah.”

“Halimah could not stand the fact that she got sidelined by her own juju priest and asked Tonto to stay the hell away from her for good. A staff of Etcetera Live called Halimah at about 2PM yesterday (Friday) to confirm the story but she demanded for a text message to be sent to her instead. Further attempts to reach her proved abortive until about 11:32PM when she finally picked and said in her own voice, “this is Halimah’s PA, she will get back to you later.”

“Hmmmm, so na juju separate the 2 of dem? No wonder dem no gree tell us wetin really happen between dem.  Breeze don finally blow fowl yansh ooo. Same sources told us that Tonto does not like tattoos; she uses them to mask incisions gotten from her visits to her juju priest”.