Home RELATIONSHIP Seven reasons not to use alcohol when depressed 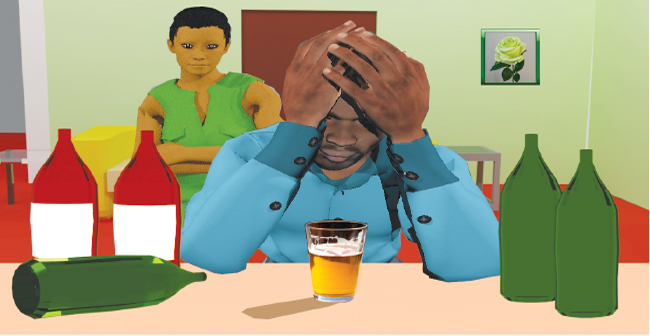 Below, experts cite seven reasons not to use alcohol when depressed:

It can lead to self-harm or suicide

Experts at Drink Aware, an organisation based in the United Kingdom, says alcohol can cause depressed people to lose their inhibitions and behave impulsively, and this can lead to actions they may not otherwise have taken – including self-harm and even suicide.

“There is a strong association between drinking heavily (either chronic or acute alcohol misuse) and suicidal thoughts, suicide attempts, and death from suicide,” the experts state on drinkaware.co.uk.

It can cause more depression

For someone experiencing anxiety, a drink might help them feel more at ease, but this feeling is short-lived. The so-called ‘relaxed’ feeling somebody may say they experience after having a drink is due to the chemical changes alcohol causes in the brain. But these effects wear off fast.

Drink Aware experts add that relying on alcohol to mask anxiety can also lead to a greater reliance on it to relax, a likely side effect of which may be alcohol dependence.

“Lower levels of these chemicals can make a depressed person more depressed,” they state, adding, “Alcohol temporarily cuts off the effects of stress hormones. This can exaggerate depression symptoms because it depresses the brain and nervous system.”

Other mental health problems may arise

Stress or drugs such as alcohol or cocaine can activate a gene that is linked to depression and other mental health problems. The gene can result in seizures, depression, manic-depressive episodes, and other mental problems, according to Robert Post, the Head, Biological Psychiatry Branch of the National Institute of Health, based in the US.

It can cause dementia

The American Psychiatric Association states that alcohol abuse can lower the levels of folic acid, and depression is most common in those with folate deficiency.

It can alter thought processes

Susan Ramsey, an associate professor of psychiatry and human behaviour expert at Brown’s Warren Alpert Medical School in the US, says alcohol abuse can suppress activity in the part of the brain that does the heavy thinking and planning.

Hence, this may make a depressed person unable to think of how to come out of their predicament.

Drinking heavily can reduce the body’s natural immune system, making it more difficult for the body to fight off invading germs and viruses, according to a Lagos-based medical expert, Dr Oyejide Awosiyan.

“People who drink heavily over a long period of time are also more likely to develop pneumonia or tuberculosis than the general population. Alcohol abuse also increases the risk of several types of cancer, including mouth, breast, and colon,” Awosiyan says.

“This means fighting depression with alcohol is never the answer. It rather adds to the problem,” he adds.

Awosiyan also tells Saturday PUNCH that alcohol abuse can lead to a heart attack, which an already depressed person may not want to have.

He says, “Alcohol abuse can affect the heart and lungs. People who are chronic drinkers of alcohol have a higher risk of heart-related issues than people who do not drink.

For those with depression, rather than resort to alcoholism, experts at the American Psychiatric Association recommend seeking ways of having long-term improvements in their mental health and well-being. Some of those alternative strategies to alcohol are as follows:

-Seek professional help by consulting a psychologist or others

-Keep active by exercising. Exercises have a way of relieving one of stress and trauma

In addition, a Lagos-based career coach and pastor, Bayo Philips, advises those with depression, whether as a result of the economic situation or other factors, to make and maintain meaningful social connections.

“Good connections can help a great deal to get out of depression. A good friend or colleague can link you to an opportunity or help you to do something that will brighten your mood again,” he says.