Diego Maradona has died at the age of 60.

The Argentine football legend suffered a cardiac arrest at home in Tigre. 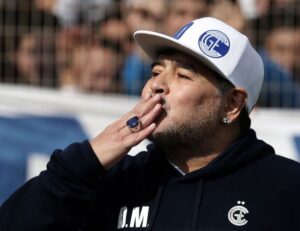 Maradona underwent an operation to remove a blood clot on his brain on October 30.

The Gimnasia boss fell unwell after his side beat Patronato 3-0 and was taken to hospital in La Plata, near the Argentine capital of Buenos Aires

Scans discovered a subdural hemetoma, requiring Maradona to undergo immediate surgery to remove the problem before being sent home to continue his recovery.

Reports in Argentina say Maradona was showing signs of recovery, but the 60-year-old then suffered a cardiac arrest and has passed away.

Maradona is widely considered one of the greatest footballers of all-time after his glittering career in which he won the World Cup in 1986.

After rising through the ranks of local club Argentines Juniors, Maradona joined Boca Juniors and emerged as a star before joining Barcelona in 1982.

He spent two years at the Nou Camp before heading to Napoli, where he spent the next seven seasons and scored over 100 goals.

A local newspaper stated after his signing, that despite the lack of a “mayor, houses, schools, buses, employment and sanitation, none of this matters because we have Maradona.”

Maradona led Napoli to the most golden period in the club’s history, twice winning Serie A, while in 1986 he dominated the Mexico World Cup, as Argentina ran out winners – knocking out England en route, thanks to the Hand of God and a sublime virtuoso goal from Maradona.

A tweet read: “The Argentine Football Association, through its President Claudio Tapia, expresses its deepest pain at the death of our legend, Diego Armando Maradona. You’ll always be in our hearts.”

Maradona’s long-time rival, Pele, declared: “Certainly one day we’ll kick a ball together in the sky above.”

While Gary Lineker referred to Maradona as “arguably the greatest of all time”.

Lineker tweeted: “By some distance the best player of my generation and arguably the greatest of all time. After a blessed but troubled life, hopefully he’ll finally find some comfort in the hands of God